The Americans with Disabilities Act (ADA) is a federal law that protects individuals from discrimination in public places. In terms of the workplace, the ADA requires employers to provide reasonable accommodations for any employees with disabilities. Given that, according to the CDC, 61 million adults in the United States live with a disability, it’s very likely that there are people with disabilities working at your company. This means that it’s vital that you understand all the provisions of this law so you can make these accommodations where necessary.

In this complete HR guide, we are going to discuss what the Americans with Disabilities Act is and how it affects you as an employer. We will also explain what the terms reasonable accommodation and undue hardships mean, and how you can prevent employment discrimination based on disability in your business and ensure ADA compliance. 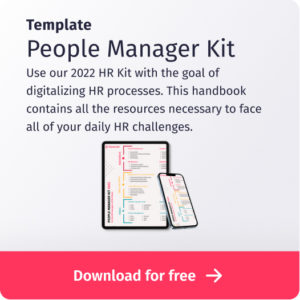 Brief history of the Americans with Disabilities Act (ADA)

The Americans with Disabilities Act (ADA) was signed into law on July 26th, 1990, by President George H. W. Bush. The federal civil rights law was created to protect people with disabilities from discrimination in all areas of public life. This includes access to schools, jobs, and transportation, and any other private place open to the public such as restaurants and theaters.

Essentially, the ADA prohibits discrimination on the basis of disability just as other civil rights laws prohibit discrimination on the basis of race, color, sex, national origin, age, and religion. It ensures that people with disabilities have the same opportunities as everyone else in terms of employment, the purchase of goods and services, and the ability to participate in state and local government programs.

The Americans with Disabilities Act wasn’t the first step towards protecting people with disabilities. In fact, the Act was the culmination of many years of work:

The Americans with Disabilities Amendments Act of 2008 (ADAA)

After the Americans with Disabilities Act came into effect, many people started filing lawsuits against their employers relating to claims of discrimination. However, although the language used in the Act was specific, it was also, arguably, open to interpretation. And this resulted in inconsistent court findings across the nation.

One of the most renowned sets of cases relating to the ADA was brought before the Supreme Court in 1999. It was known as ‘The Sutton Trilogy’. These 3 cases claimed that the findings of lower courts significantly limited the interpretation of the ADA, and they were therefore unjust. The Supreme Court upheld these findings and claimed that only those people with severely limiting impairments should be deemed disabled. However, Congress disagreed with the Supreme Court’s ruling and the ADA Amendments Act (ADAAA) was eventually signed into law in 2008.

Amendments to the original ADA included:

Who enforces the Americans with Disabilities Act?

Aside from the U.S. Department of Labor, there are a number of other federal agencies that are responsible for enforcing or investigating claims relating to the Americans with Disabilities Act.

What employers need to know

Ok, so we’ve discussed the legal aspects of the ADA, but what do you need to be aware of as an employer? How can you protect yourself from claims relating to the Americans with Disabilities Act?

To put it simply, as an employer, you need to understand:

Let’s take a look at these areas in a bit more detail. If you need further clarification, you can find out more about your responsibilities as an employer from the U.S. Department of Labor’s (DOL) Office of Disability Employment Policy (ODEP).

The Americans with Disabilities Act of 1990 (ADA) makes it unlawful to discriminate in employment against a qualified individual with a disability. The ADA also prohibits discrimination against people with disabilities in State and local government services.

Aside from hiring and recruitment, you also need to make sure you don’t discriminate in relation to:

Who does the Americans with Disabilities Act protect?

For an employee to be protected by the Americans with Disabilities Act, they must have a physical or mental impairment that substantially limits a major life activity. This includes hearing, seeing, speaking, breathing, performing manual tasks, walking, learning or working. The ADA also protects individuals who have, or are regarded as having, a substantially limiting impairment.

This means that you cannot discriminate against a legitimately qualified candidate (someone who is capable of performing a role and has the necessary qualifications and experience) based on their disability or impairment. If a candidate with a disability meets the minimum requirements for a position or promotion, then you must consider them for the role, regardless of their disability. Otherwise, this would be considered employment discrimination.

So, which physical and mental disabilities does the ADA recognize? What do you need to be aware of to ensure ADA compliance?

Physical impairments and disabilities include but are not limited to visual, speech, and hearing impairments; cerebral palsy; epilepsy; muscular dystrophy; multiple sclerosis; orthopedic conditions; cancer; heart disease; diabetes; and contagious and noncontagious diseases such as tuberculosis and HIV disease (whether symptomatic or asymptomatic). The Act also covers the use of wheelchairs or prosthetics.

Mental impairments and disabilities include but are not limited to cognitive or mental health disorders; mental retardation; emotional illnesses; and specific learning disabilities. Moreover, the ADA also covers certain forms of addiction, such as alcoholism or drug addiction if an individual has completed rehabilitation.

If a candidate or employee has a record or history of any of the above impairments, then you cannot discriminate against them based on their disability. The same applies if someone believes that they have an impairment, regardless of whether or not they have a medical record of it, or if they are regarded by others as having a disability.

According to the Americans with Disabilities Act, people with disabilities are entitled to reasonable accommodation in their place of work.

But what does this mean?

Essentially, it means that you must ensure you provide as many accommodations as possible so that an employee with a recognized disability is able to perform their role. For example, this might include providing a certain type of chair, desk, or computer. It also means that you cannot require them to perform certain functions such as heavy lifting.

If you fail to provide reasonable accommodations to people with disabilities in your business, then the ADA would consider this to be employment discrimination. The only exception to this is if an accommodation would cause you undue hardship. In other words, it would require significant difficulties, disruption or expense, or fundamentally alter the nature of your business operations.

To ensure ADA compliance, you need to ensure your HR practices comply with the provisions of the Americans with Disabilities Act.

But which practices does the ADA apply to?

To ensure ADA compliance, make sure you review your processes and procedures for:

Positive impact of the ADA

Since the ADA came into effect over 30 years ago, it has had a number of positive effects on the employment opportunities offered to people with disabilities.

HR compliance is a critical part of any human resources department. What’s more, aside from complying with legal requirements and avoiding costly fines and penalties, an environment of human resources compliance also has a positive influence on employee performance and development, retention, and hiring. Compliance is vital for the long-term success of a company.

In terms of the Americans with Disabilities Act, the best way to stay ADA compliant is to make sure you understand all provisions of the Act, including the language behind general and specific employer requirements. This includes understanding which accommodations you need to offer people with disabilities and what’s construed as undue hardship. It’s also important to make sure you keep up to date with any changes in the ADA and in HR compliance laws in general. A great way to protect yourself is to include all your ADA obligations in your HR compliance checklist and establish clear policies and procedures to prevent discrimination in any of your business practices.

Another effective way to ensure ADA compliance is by using the right HR tools and software. For example, Factorial’s ‘all-in-one’ centralized HR software platform includes a range of features that help your company stay ADA compliant.

With Factorial’s HRIS solution you can:

Cat Symonds is a freelance writer, editor, and translator. Originally from Wales, she studied Spanish and French at the University of Swansea before moving to Barcelona where she lived and worked for 12 years. She has since relocated back to Wales where she continues to build her business, working with clients in Spain and the UK.  Cat is the founder of The Content CAT: Content And Translation, providing content development and translation services to her clients. She specializes in corporate blogs, articles of interest, ghostwriting, and translation (SP/FR/CA into EN), collaborating with a range of companies from a variety of business sectors. She also offers services to a number of NGOs including Oxfam Intermón, UNICEF, and Corporate Excellence - Centre for Reputation Leadership.  For more information or to contact Cat visit her website (thecontentcat.com) or send her a message through LinkedIn.

Categories Legal & Finance
When you run a business, it’s important to have a clear and documented record of all your financial data. This includes your revenue, expenses, assets, [...]
Cat Symonds
February 2, 2023

Categories Legal & Finance
After months of dealing with rising costs and inflation, workers across the United States are doing what they can to make ends meet. Many employers [...]
Katharyn Valier
February 2, 2023

Sign up for our weekly newsletter and get the latest trends, tips and resources for HR professionals.