Onboarding vs. Orientation – Is there really a difference?

Onboarding vs. Orientation – Is there really a difference? 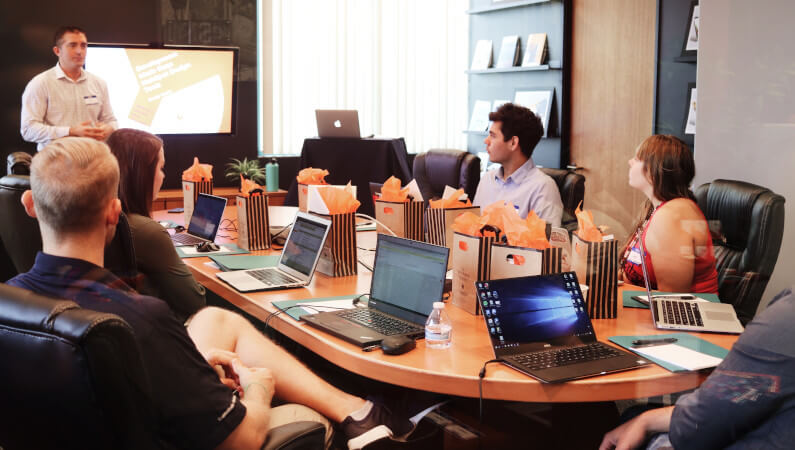 There was a time when potential employees had their interview with human resources and, after being accepted, their first day consisted of a quick walk around the office and a brief introduction to the staff and their role.

Think along the lines of:  “this is our break room”, “meet Sheila – she’s in charge of ordering coffee”, “press this button when so and so calls” – call it an instant orientation if you wish. Very often you were left feeling a little in the lurch. Nowadays, with the advancement of company branding and image, such a simple introduction just doesn’t cut it.  This is where onboarding comes into play. However, if you were to ask the difference with onboarding vs. orientation, most would still scratch their heads in perplexion.

First the basics. Onboarding exists to support the new hire as they gradually become familiarized with the company’s culture, values and unspoken rules. The process consists of a series of events designed to aid employees to integrate into their departments. Employee onboarding helps new hires feel welcomed, leading to job satisfaction which, in turn, results in increased employee engagement.  Also, proper onboarding leads to less turnover, higher employee motivated and increased production.  It’s a win-win situation.

A good onboarding plan includes the orientation – a key stage of the onboarding process – a course designed to teach new employees about the company’s mission and their role as part of the big picture. During orientation, Human Resources address issues such as employee paperwork, system logins and passwords, and the review of health and safety. There are often lectures and training sessions, amongst other things, to help smooth the transition into the company.

In a nutshell, orientation is a brief introduction to the company whereas onboarding is needed to get recent hires invested in their daily duties. Clearly both onboarding and orientation are crucial to the success of a new hire.

How long will a typical onboarding last? A thorough onboarding program often begins from the very moment a recruit accepts the job offer and can last up to a year. Within this time frame, new employees can expect to take part in the orientation, actively participate in presentations, and take on new projects. Regular meetings with their managers and Human Resources are also scheduled to monitor their progress. It’s clear why more than a month is required.

Orientation is a much simpler affair lasting from a mere week to a month.  New hires can expect to sit in on various presentations on company policies and have their questions about their new job answered.

How do companies plan for onboarding and orientation?

Planning for onboarding vs orientation for new employees is quite different, but both are an absolute necessity. How do companies plan for effective onboarding? Here are the steps.

Focus on what you want to achieve – employee satisfaction increased productivity, firm identification with the brand and smooth integration into the role amongst other things.

The first step involves analyzing what is required for this new role.  How will you communicate your values and culture to your new hire? How can you clearly state what is expected from them in their new role?

The next step starts as soon as the employee accepts the offer, known as pre-onboarding.  This involves gathering relevant information and registering the employee with the social security entity in your country.  It’s a good idea to keep in regular contact with the new employee. Keep in mind that they haven’t yet started to work for you and other companies might swoop in stealing them.  Maintaining close contact assures the recruit that you are taking a personal interest in them and that you are serious.

The first day is a crucial part of making the employee feel welcome and comfortable. You might introduce the employee to their co-workers and show a short welcome video. Some even go as far as to gift a welcome pack. You should explain workplace procedures and give them anything they need in order to do their job (laptops, mobiles, etc). Twitter, for example, has a 75 step onboarding process which starts off by being gifted a t-shirt and a bottle of wine, breakfast with the CEO, a tour of the facilities, lunch and bi-weekly presentations.

The orientation usually takes place during this time. All successful companies have a clear orientation process. Take, for example, LinkedIn’s orientation covers a quick review of the company, ice-breaker introduction session, a campus tour and lunch, followed by a presentation explaining how the firm invests in its employees.

Again, it’s a good idea for managers to have followed up with the employee within the first week to see how new hires feel in the workplace. Looking forward ideally you should arrange a catch up with them every 15-20 days.

You could also consider giving them a mentor – take Buffer, an online platform similar to Twitter,  who has a ‘three-buddy’ system. Each ‘buddy’ plays a different role in the 6-week onboarding and makes the new hire feel guided and supported within the role.

Google’s focus on company culture and values makes  Google’s onboarding plan one to envy. The employee’s new manager is given an onboarding checklist of things to institute on the first day. Open, honest dialogue is encouraged throughout this process and new hires are helped to start building a social network.

For help planning an effective onboarding and orientation let us help with onboarding your employees.

Are employees paid for the orientation period?

In short yes.  According to the Fair Labor Standards Act employees must be paid for attending orientation related lectures, training sessions and any other administrative tasks.  If you think about it, orientation usually takes place during normal working hours and so is mandatory for new employees. The orientation program requires new hires to perform certain work-related tasks (filling out new employee paperwork for example) and other aspects of their employment. For this reason, payment should be a given. On the other hand, in the case that orientation takes place outside normal working hours, is not related to their employment or is voluntary then payment is not required.

When it comes to onboarding vs. orientation, they really go hand in hand. Orientation forms part of the onboarding process but onboarding is a much wider concept.  It goes beyond just telling a person their role in a company, but rather their role within the department as a whole.  Once they have gone through the orientation program employees are ready for training. Following this, individuals are prepared with the tools to actively contribute to the success of their department.

Categories People Management
A direct report is an employee that works directly below another person in an organization, often referred to as a subordinate. Most managers have at [...]
Cat Symonds
May 31, 2022

Categories People Management
A training needs analysis is a key tool for HR professionals. It helps you establish what areas of L&D you need to focus on in [...]
Cat Symonds
March 7, 2022